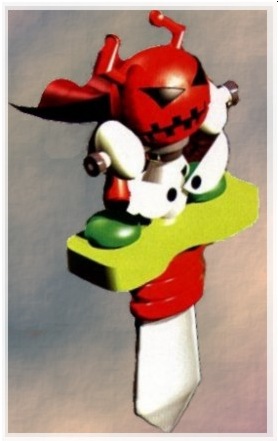 BACKGROUND: Mack was ordered to attack the Mushroom Kingdom and occupy it for Smithy. A number of Shysters were hired from the 8 Bits Club to assist Mack, and since he shared the Shysters' passion for bouncing, they quickly accepted him as their leader.
Mack's most notable features are a large, jack-o-lantern head, and a giant pogo-sword similar to the ones ridden by Shysters. He also wears a read cape.
As one of Smithy's lieutenants, Mack is quite powerful, and he has a powerful command of fire magic. Some believe that he should be classified as a fire type because of this, but he also has features of human and plant-type characters, and has finally been classified simply as a "monster".