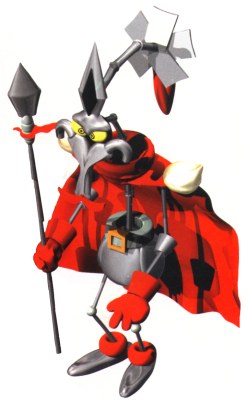 WEAKNESSES: Possibly thunder. He's also known to rust if he spends too much time in water.

BACKGROUND: Yaridovich is one of Smithy's highest-ranking lieutenants. He is known to be a vain schemer. He works hard to please his superiors, and he looks down on those he surpasses. Yaridovich considers himself too important to soil his hands doing physical activities like fighting or swimming, yet he turns out to be a formidable opponent in battle.
Yaridovich is a master of disguise, he can change shape and create multiple images of himself at will, but the number of colours he can use is limited, making it easier to spot him in disguise. This villain is not one to mess with, but he was defeated by Mario and company on the shores of Seaside Town so he shouldn't be a threat to travelers in the Mushroom World now.