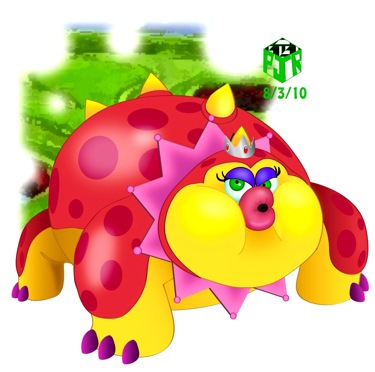 BACKGROUND: Glamdozer is the leader of the Pup-Dozers. She and her Pup-Dozers were ordered by Bowser to take over Flipsville Galaxy and he gave her a star to guard.
While her followers took over Flipsville, she commanded them from a leaf-like platform. She often warns her minions not to wake her when she is sleeping, as she gets quite a temper when she is woken from her sleep. Mario had to ground pound her stomach to wake the massive bug from her sleep. She then became angry and attacked Mario. Because of her hard body, Mario had to defeat her by ground-pounding her stomach from underneath the planet(or above, depending on where she was). Mario eventually defeated Glamdozer and the Pup-Dozers fled Flipsville.