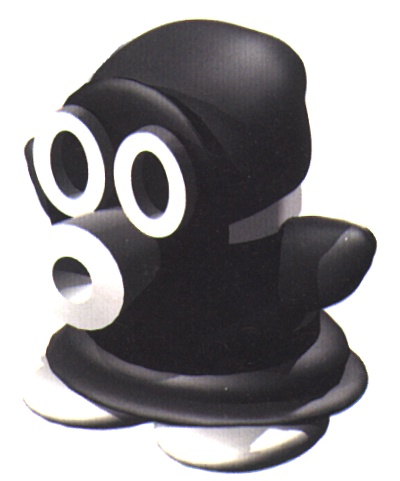 STRENGTHS: None, other than the fact that they can fire bullets.

WEAKNESSES: They are weak against ice attacks.

BACKGROUND: Snifits are members of the 8-Bits clubs, a band of mercenaries that sell their services to the highest bidders. They've worked for Wart, Booster and Kamek in the past. Unlike Shyguys, Snifits go into battle equipped with a mask that is capable of firing deadly bullets. This makes them dangerous, albeit often stupid foes. It is wise not to approach Snifits.
The colours a Snifit wears are meant to show its rank, which is based on their capabilities. However, being unorganized and less than geniuses, the Snifits have trouble keeping this system in order. Snifits have become much more rare than Shy Guys in recent years.

EVOLUTION: The biggest change that Snifits have undergone is the change in color. Originally, they came in two colours, grey and blue. The different colours signified different attack patterns and capabilities.
In Super Mario World 2, the Snifits became a bit more cartoony and detailed, and they went to peach-coloured outfits.
In Super Mario RPG, Snifits went entirely to grey outfits. The Snifits in this game are a bit stiffer looking than their previous incarnation, but look good overall. Also in this game, a second type of enemy called Spookum, which resembles a Snifit but wears blue and is a bit weaker, was introduced.