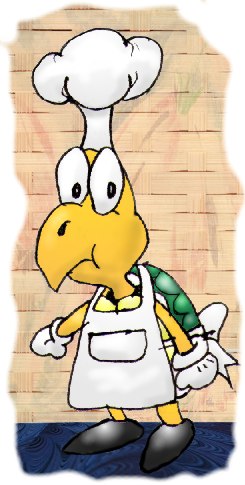 STRENGTHS: This feisty guy is strong against many magic attacks, including Fear, Poison, Sleep, Silence, and Beams.

WEAKNESSES: He is actually invincible, although he's not much of a fighter.

BACKGROUND: Chef Torte's Apprentice idolized the baking master as a youth. When he grew up, he travelled to Marrymore where Chef Torte had just taken on a permanent catering job, and he begged the Chef to teach him.
After spending twenty days and twenty nights on Chef Torte's door step, the Chef finally gave in and made the young Koopa his apprentice. Chef Torte bosses his apprentice around a lot, and likes to insult him. The apprentice generally takes this in good humour, but he doesn't realize that Torte is actually proud of his progress as a chef.