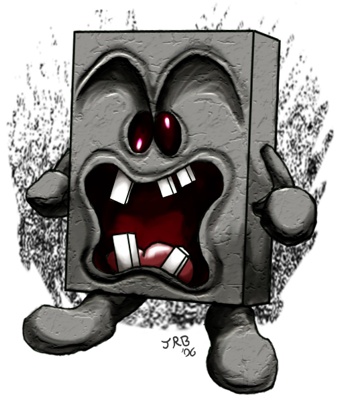 STRENGTHS: They have a tough, stone body, protecting them from frontal assaults.

WEAKNESSES: They have a huge crack in their backs.

BACKGROUND: These bizarre creatures first appeared only in the painting worlds of Peach's castle and are surprisingly dim-witted. Supposedly, they were created to be unstoppable, however, Bowser's magic left them with a severe weakness.
There was generally a chip on their back (covered with a large bandage) that Mario could then stomp. Whomps have low intelligence, as shown when they will only attack Mario if he comes within their site range. In fact, even punching or kicking them from behind (or even standing on their heads) rarely has an effect. Oddly, in Super Mario 64, it was possible to jump straight through them.
On a side note, a Whomp's face can't change very much firstly due to the primitive magic animating them, and the constant pressure from slamming down on their faces.

EVOLUTION: Whomps haven't changed too much. They were large and brick-like in Super Mario 64, then in Super Mario 64 DS and New Super Mario Bros. they became a bit more rounded around the edges, and their facial features stood out a little more.