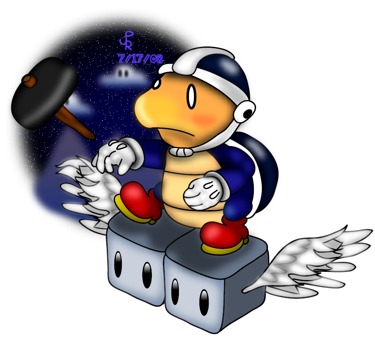 STRENGTHS: Strong against most Jump attacks.

WEAKNESSES: Hitting the blocks from below, fire.

BACKGROUND: Amazing Flyin' Hammer brothers are cousins of the typical Hammer brothers. Unlike their agile relatives, these ones are lazy and don't tend to move a lot on foot. However, they are more experienced in riding on things. Blocks for example. And they also have more strength, able to throw two hammers at a time.

EVOLUTION: Their first appearance was in Super Mario World. They were basically the Hammer Brothers of the game, except they were fatter, they had long red shoes, thick helmets and a blue body with a white belly. They also ride on flying blocks.
After a long absence, they finally returned in Super Princess Peach. But this time they were even lazier then before! They sleep, which means Peach had to walk slowly if she ever encountered one. If they woke up, then they would just act like a normal Flyin' Hammer Brother. Their red shoes weren't so long, not to mention they also lost a bit of weight.