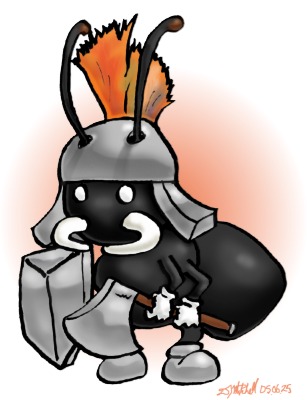 BACKGROUND: Armored Ants are an arm of the Shogun class of ants living in Land's End. The most resilient of the Shoguns left to live in Barrel Volcano where they earn their living by mining ores in this dangerous area, over the years they started their own clan and became the Armored Ants. They wear similar armour to the Shoguns with an orange headress to show their loyalty to the Armored ant clan.
Shoguns and Armored Ants maintain a trading relationship with each other, but are mainly independent. While Smithy was able to bribe the Shoguns into fighting Mario and his friends, the Armored Ants have no natural predators and didn't need any of Smithy's new weaponry. Many of them did fight Mario anyway since they are extremely territorial, although they have learned to live with other species in the Volcano in peace. Many even work together with the Magmi living in the Volcano.