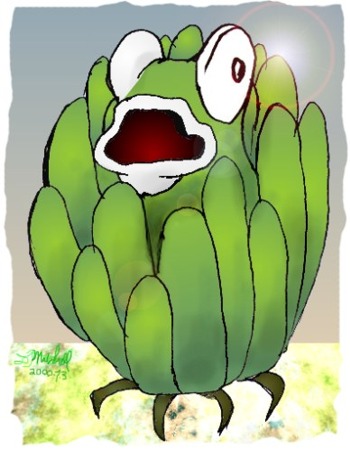 BACKGROUND: Artichoker is a peculiar plant that has developed some monster-like characteristics. It is mobile, and has a head-like flower, like a Piranha plant (although the Artichoker's flower resembles a bullfrog's head, not a Piranha Plant's) They hide their head inside their leaves, which makes them appear like regular shrubs, allowing them to trap prey more easily.
Artichokers are found in mountainous areas and planes. One particularly large group lives in around Booster Pass, which has led to some speculation that they were actually brought to life by a member of the Booster family (see Carroboscis for the details of this legend.) These creatures are large enough to eat mushroom people and humans, so it's best to avoid the shrubs in Booster's pass unless you're with an experienced guide.
Luckily, Artichokers can't move too fast, and so they rely almost entirely on the element of surprise to catch less intelligent animals. They have a surprising command of special attacks, as well.