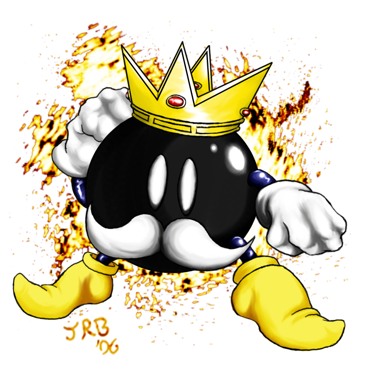 WEAKNESSES: Slow, hates explosions and is irrationally obsessed with his own mustache.

BACKGROUND: Seemingly able to create Bob-ombs out of thin-air, Big Bob-omb was considered to be the Koopa Troop's Bob-omb resource. Considered the King of all Bob-ombs, the Big Bob-Omb resided at the top of a huge mountain in Super Mario 64. He didn't seem as obssessed over his mustache as he did in Mario 64 DS. The Big Bomb's current relationship with the Koopa/Mushrooom Kingdoms is unclear, though he did reappear recently as the Boss of the 5th set of Missions in Mario Kart DS.
Mario's first fight with Big Bob-omb in the original N64 title Super Mario 64 is considered legendary considering it is the first true Boss fight in full-on 3D.