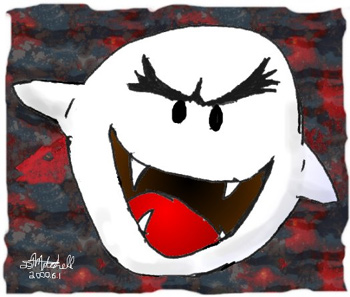 SKILLS AND ATTACKS: Flinch (they hide behind their arms); Scream, Lightning Orb, Bolt.

WEAKNESSES: Weak against Pure Water, and can also be beaten with eggs (Yoshi games only).

BACKGROUND: Since Boos come in all shapes and sizes, it is no surprise that some confusion has arisen in naming them. While Big Boo is used to refer to giant boss characters in SMW and SM64, it is also used to refer to regular enemies in other adventures. So Big Boos may have a variety of powers and strengths, but are generally bigger than Boo Buddies.
They haunt ghost houses and castles, and stalk the brothers when they are not looking. If Mario or Luigi turns around, the Boos will usually hide their faces and pretend that they aren't doing anything.
Despite their timidness, Big Boos can be quite dangerous. They can be tough to get around because of their size, and they can sometimes corner unsuspecting victims who look away for too long. Big Boos occasionally work for Bowser, because they are always up for some trouble but they are more closely associated with a large gang of other ghosts, the Boo clan.

EVOLUTION: Big Boos first appeared in Super Mario World - the Big Blue Boo was very much like The Big Boo (see the Bigger Boo section), except a boss. He just hung out all over the ghost houses, getting in the way.
In Super Mario World 2, The Big Boo shrunk a bit. He was still bigger than a Boo Buddy, but nothing compared to the bosses.
In Super Mario RPG they shrunk again, and some people argue that the characters were mis-named, and should have been called Boo Buddies. But it seems like another monster from that game, Lil' Boo, is closer-related to Boo Buddies than Big Boos. In Super Mario 64 they grew very large again, and became bosses for the haunted house level. In Yoshi's Story, they're somewhere between their largest size and their smaller sizes and they're very three-dimensional, possibly the best looking of the bunch.