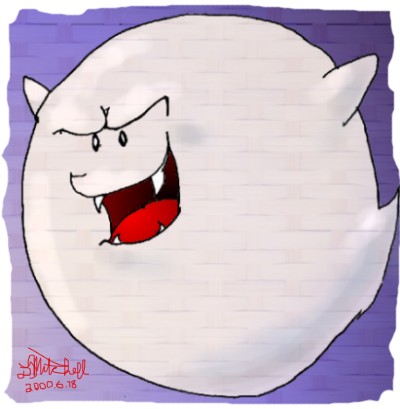 SKILLS AND ATTACKS: Some can disappear or make themselves invincible for a short time. Boolossus can split into many Boos.

BACKGROUND: Bigger Boos are truly gigantic Boos that are many times bigger than a human. Bigger Boos are very rare, and usually appear under unnatural circumstances, such as being created by magic spells.
While King Boo technically ranks higher than Bigger Boos, they are among the most powerful, and certainly biggest, members of the Boo Clan. They usually work for someone else.

EVOLUTION: Bigger Boo first appeared in Yoshi's Island. He grew as he was attacked, and could become so huge that he would not fit in one screen. He also has beady black eyes, just like smaller Boos.
Bigger Boos had a small cameo in Super Mario RPG where Bowser summoned one to perform his Terrorize attack. He has a huge face compared to the Bigger Boo in Yoshi's Island, and he's a bit transparent.
In Luigi's Mansion, Boolossus was formed from 15 regular Boos. Since he's made up of smaller Boos, some would say he's a different species from Bigger Boo, but he's similar in size so they are included together. Boolossus has huge glowing eyes and can be broken into his smaller Boo parts.
The smaller Boos forming a Bigger Boo returned in Paper Mario: The Thousand Year Door, where they were referred to as Atomic Boo and have a very cartoony look.