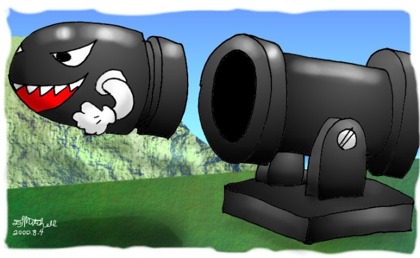 STRENGTHS: None in particular.

BACKGROUND: Blasters actually appear in virtually every Mario game that has Bullet Bills in it, but the RPGs are the only games where you can really fight them.
Essentially, Blasters are large cannons that fire Bullet Bills. They are usually black, and sometimes have some design painted on the side. Originally, these devices were manufactured by the Koopa Troop, but Booster managed to get ahold of some, and modified them for his own personal defense needs.

EVOLUTION: In the early days, before Super Mario RPG had ever been imagined, Blasters had dual-directional cannons and were usually marked with a skull on the side.
In Super Mario RPG, Blasters became 3D but they maintained their classic look, with the skull on the side and the cannon having a "double-barrel" that could fire in either direction (although they only fire in one direction). This was also one of the first games where Bullet Bills were fired from other things besides Blasters: Snifits could fire them too.
In Paper Mario, Blasters look quite a bit different, they are more like regular cannons without the double-ended barrel, so they can only fire in one direction.
In recent games, Bullet Bills are being fired out of all sorts of things, not just Blasters. For instance, in Super Mario Sunshine they are fired by red gun turrets and Bowser Jr.'s ship.
Bill Blasters returned in Mario & Luigi and Paper Mario: The Thousand Year Door. We don't have pictures of the Mario & Luigi Blasters, but in PM: TTYD they look almost exactly the same as the first Paper Mario.