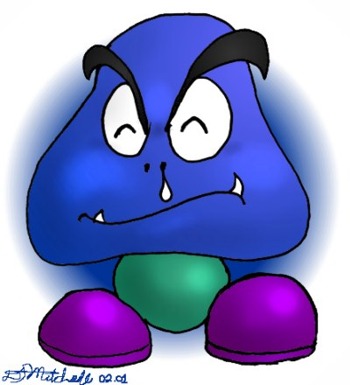 WEAKNESSES: He is usually in poor health, and an all-around weak opponent.

BACKGROUND: Blue Goomba is one half of the Goomba Brothers. He isn't as strong as his brother, Red, and seems to be in poor health most of the time. As his name implies, he is coloured blue, which is unusual for a Goomba.
The Goomba Brothers admire strength, and sided with the enormous Goomba King thinking he must be the most powerful Goomba around. After their defeat by Mario and Goombario, they decided to change their ways and model themselves after the most powerful Goomba they had met yet: Goombario.
The Goomba Brothers are now quite harmless, and they tend to spend a lot of time with Goombario and his family in Goomba Village.