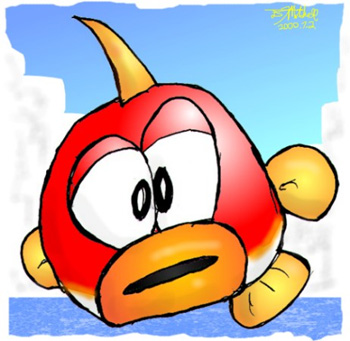 STRENGTHS: Can't be beaten, and the red ones can eat you whole! (in Yoshi's Story).

BACKGROUND: These fish are closely related to the Cheep-cheep. In fact, when they first appearaned in Super Mario World, they were almost exactly like Cheep-cheeps.
Since then, they've changed quite a bit. They now tend to be much larger than regular Cheep-cheeps, and have some different attacks (blue ones can spit water).
While they don't seem to have any official connection to Bowser, they are quite dangerous to adventuring heroes.

EVOLUTION: The most complicated thing about the evolution of the Blurp is that they are so similar to Cheep-cheeps. Some even argue that they are Cheep-cheeps and have just been given different names.
While this arguement is acceptable for the Blurps appearing in Super Mario World, the ones in Yoshi's Story are quite different. They are much larger than ordinary Cheep-cheeps, and fight differently, too.
Some have suggested that Cheep-cheeps and Blurps are actually two different species which are starting to diverge, although it's interesting to note that Blurps appeared quite a long time ago, since Yoshi's Story takes place before most of the older Mario games. Hopefully, future games will help to clear up this confusion.