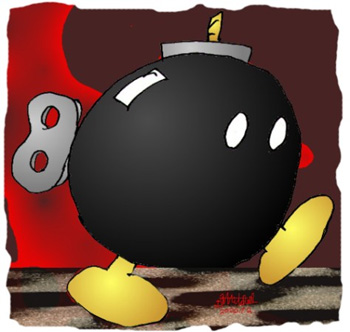 STRENGTHS: Their explode attack is dangerous, especially when they team up.

BACKGROUND: Bob-ombs first appeared in the dreamland of sub-con. They were manufactured by Wart in that world. These mechanical monsters are manufactured by the Koopas, but they are not known for great loyalty. They usually have below average intelligence, and can be reprogrammed by a technically capable person, which explains why they can are found working for many different people besides Bowser.
Bob-ombs look like bombs with feet and eyes. Some also have a winding mechanism which gives them power, but some run on a different power source. Bob-ombs basically attack by blowing themselves up. This makes them pretty dangerous, and they shouldn't be approached except by someone who is experienced with them. Experts can use Bob-ombs as weapons.

EVOLUTION: Bob-ombs first appeared in Super Mario Bros.2, and for quite a while, they were the only characters from that game to appear in subsequent Mario games. In SMB2, The Bob-ombs had arms, something which they lost in later incarnations.
In Super Mario Bros.3, the arms were taken away, but Bob-ombs gained a wind-up key at the back. The same basic design was kept for Super Mario World, but without the wind-up key. Also in Super Mario World, Parabombs and Bubble Bob-ombs were introduced. These variations on the originals look pretty much the same, but with special equipment. The Parabombs also appeared in the non-Nintendo title, Hotel Mario (see the media section for a picture).
In Super Mario RPG, we finally got some Bob-ombs that look like they do in the instruction books. These ones had a fuse, as well as the old wind-up key. Super Mario 64 is much the same, but minus the wind-up key. This game also introduced the Pink Bob-ombs, a friendly race of Bob-omb that controls the cannons located in that game's various levels.
We also have a look at a Bob-omb from Paper Mario. They come in multiple colours in this game (see the image in the media section). Like many of Paper Mario's characters, these incarnations look as though they might be the most picture-perfect so far - they retain the wind-up key, and the fuse that we've seen previously. In this game, a pink one named Bombette even helps Mario throughout the adventure.
In Paper Mario: The Thousand-Year Door, they return with much the same appearance as they had in the last game. Once again, not all Bob-ombs are evil and one, by the name Admiral Bobbery, assists Mario in the game.
In Super Mario Sunshine, Bob-ombs were completely different. They have flat faces with the wind-up key on top. When they are about to explode digital screens on their faces count down from 3 to detonation. They are black with red eyes when they are angry and blue with green eyes when they are content.