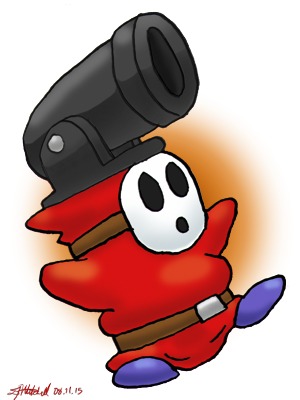 STRENGTHS: Can fake you out.

WEAKNESSES: You can take out their cannons.

BACKGROUND: Boom Guys are essentially just Shy Guys with a Bullet Bill blaster on their heads, which they are trained to use. Boom Guys were used as security in Bowsers Castle to shoot enemies inside. Though they served Baby Bowser in the past some live inside Gritzy Caves, where they became faster and stronger, and possibly joined the Shroobs.