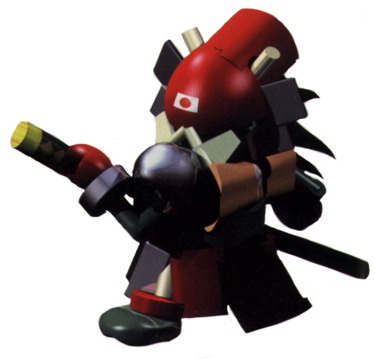 BACKGROUND: Boomer is a soldier that Smithy put in charge of the minions of Bowser's Keep. He wears Samurai-style armour that can change colour, endowing its owner with either greater physical power or great magical power.
Boomer is fond of drama: he enjoys making speeches, and his closest friend in Bowser's Keep was the Chandeli-Ho that held his chandelier aloft for flashy fight scenes. The Chandeli-Ho insists that Boomer's final act of falling from the chandelier didn't hurt him, but he's never been heard from since.
It's uncertain whether Boomer was one of Smithy's inventions or a humanoid, but no Machine Made versions of Boomer were seen in the Smithy Factory.