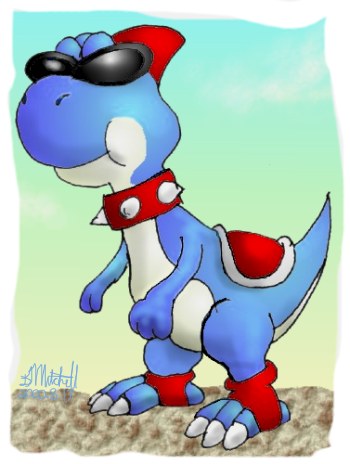 STRENGTHS: He's supposed to be fast, although once you get the hang of running he's not that great.

BACKGROUND: Boshi is a Yoshi with a bad attitude. He's light blue with red spines and likes to wear a studded collar and sunglasses.
Boshi gained noteriety by declaring himself the fastest Yoshi alive. For some time he dominated the Yoshi racing circuit, and even declared himself their leader. As the fastest in the group, the others felt he was qualified, and he maintained his position by carefully choosing competitors who would lose to him in one-on-one races.
Eventually Yoshi was able to beat Boshi with some help from Mario. The rest of the Yoshis tried to declare Yoshi their new boss, but he declined, although Yoshi does have the respect and loyalty of most of his relatives. Boshi now competes fairly against the other Yoshis, and although he wins his fair share of races, the rumour that he was the fastest Yoshi alive has been put to rest. Boshi is not as dominant in all-out races against more than one competitor as he is in one-on-one races, but he seems to have learned to enjoy the challenge.