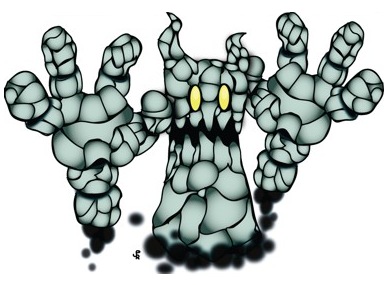 STRENGTHS: He's defended by a helmet of boulders, plus he gets hands at the seccond half of the fight.

WEAKNESSES: You can use Bomb Boos to destroy him.

BACKGROUND: Bouldergeist is a shadowy ghost boss found in the Ghostly Galaxy. He pulls rocks towards his body and becomes a stony head. His main attack consists of spitting boulders, which turn into Bomb Boos when they break. Mario could grab these boos by the tongue and swing them at Bouldergeist, breaking down his stony defence.
Though they probably have no first hand relation, Bouldergeist bears a strange resemblance to Bogmire.