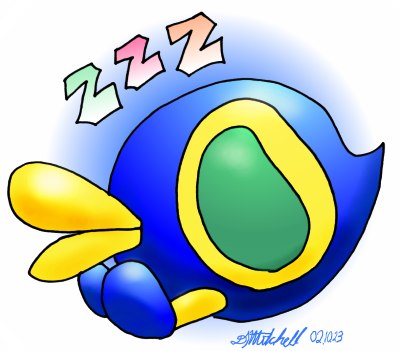 STRENGTHS: They are quite hard to kill.

WEAKNESSES: They taste delicious to Yoshis, they can be beaten by Dune Buds.

BACKGROUND: Cataquacks are beach-dwelling monsters that nhabit Isle Delfino. They are especially numerous around Gelato Beach. These bird creatures are round with duck bills, large green eyes and small feet. They are relatives of the rare Plungelo species also found on Isle Delfino. They are usually blue coloured but many red coloured ones appeared during Mario's vacation on Isle Delfino.
The large green eyes cataquacks have evolved are designed to reflect as much light as possible during the day while allowing as much light in during the night. These creatures are mainly nocturnal, so this allows them to hunt at night but protect their eyes if when they awake during daylight hours.
Cataquacks are typically wild, but it is believed that the red ones introduced to the island while Mario was visiting their may have been tamed and trained to attack by the Koopa Troop. They are much more aggressive than their blue counterparts.