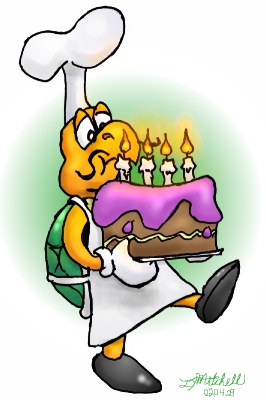 STRENGTHS: Torte is strong against many magic attacks, including Fear, Poison,

WEAKNESSES: Chef Torte is a cooker, not a fighter. He can't actually be beaten, but

BACKGROUND: Chef Torte is a Koopa with a mission: to bake the world's greatest wedding cake! As head Chef for Marrymore, the Mushroom World's most prestigious Wedding-themed resort, Chef Torte Prides himself on baking great cakes.
Torte has an apprentice who he enjoys bossing around and insulting, but he is secretly proud of his apprentice's work. Together, the two of them are among the greatest Koopa celebrities around, and they helped to change the perception that Koopas are evil.
Torte is very demanding, and does not like people crowding his kitchen. The administration at Marrymore work hard to ensure that he is happy, as his food is one of Marrymore's main attractions.