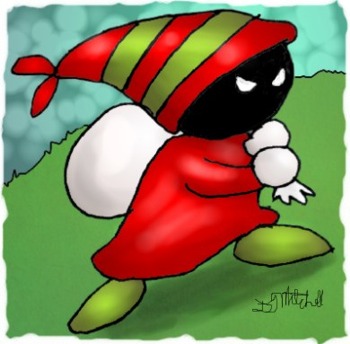 BACKGROUND: These petty thieves like to hang out around Rose Way, and have also been known to join forces with Croco. They can be easily identified by their shady faces, and those groovy toques they like to wear.
They're very sneaky, preferring to move in, attack, and then run away. Their intelligence is quite a bit higher than most enemies, close to the level of Shy Guys.
As a matter of fact, it is rumoured that Crooks (and their cousins, Sackits) were rejected by the 8-bits club because they refused to wear masks (not that they'd need to, with those dark faces). They then formed their own group, which is constantly competing with the 8-Bits Club, although it is not as large.