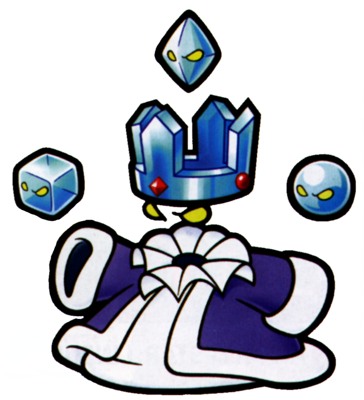 SKILLS AND ATTACKS: Copy it self.

BACKGROUND: Once it was a man called Crystal. He lived in a group of ten people. They lived in the cold North and one day Crystal got kicked out; Crystal was alone in the dangerous snow and he decided to go and find help. So he went off to the high mountains and he came to a big castle. He rested there, but it was cold inside too, so he died. He became a ghost and he spread shadow around the castle and made it into a crystal castle.
Some years after that Bowser came to his castle and defeated him thanks to the Star Rod. Bowser gave him a Star Card to protect from Mario. Crystal King began to build traps and puzzles to protect himself. Crystal King can disappear with the wind!