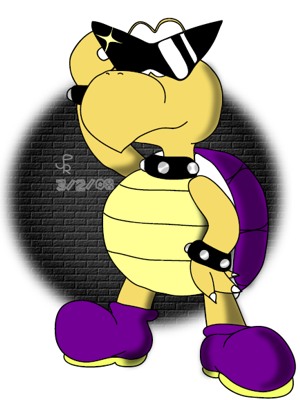 STRENGTHS: The shell protects the body a bit.

WEAKNESSES: When it is flipped over, the defence sinks to 0.

BACKGROUND: Dark Koopas are crazy Koopas. They spin in their shells almost all the time. Dark Koopas can also create tornados that makes their opponents dizzy.
There are two types: one has a purple shell, and the other is completely black and are like shadows. Both Dark Koopas appear underground. The reason is that Dark Koopas like dark surroundings.