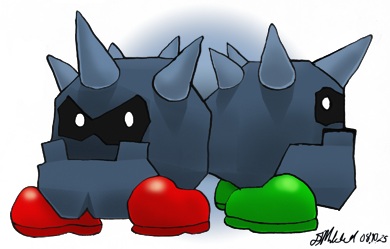 STRENGTHS: Quantum defense which can even block most piercing moves.

WEAKNESSES: Come as a pair, not too smart.

BACKGROUND: Two Cleft brothers once had a nasty run-in with a pool of lava. But since Clefts are immune to fire, their bodies collected the molten rock and compressed into extremely hard shells. Even their head spikes diamondized. Since the mixture is mostly iron, the two called themselves Iron Clefts. With their new almost-invincible bodies, they decided to get famous and headed for the Glitz Pit. Oddly, the older brother wears red shoes while the younger wears green.