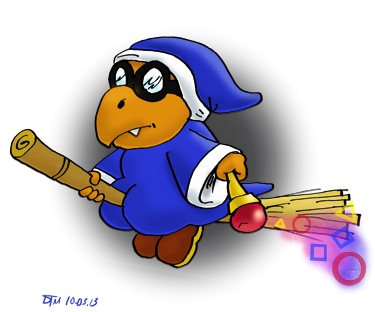 BACKGROUND: Kamek is probably the oldest Magikoopa in the Mushroom Kingdom. He was Baby Bowser's caretaker when he was a baby. He made his debut when he tried to steal Baby Mario and Baby Luigi from the stork and only succeeded in snatching Baby Luigi. Baby Mario, however fell from the sky onto Yoshi's back. The Yoshis decided to help the brothers reunite. Kamek used his power to make normal enemies into large bosses to hinder the Yoshis. After the Yoshis beat Kamek and a giant Baby Bowser, Kamek shouted that they would return.
Later, Kamek traveled back in time with Adult Bowser to try and kidnap the Star Children by kidnapping all the babies of the world. Not suprisingly, the Star Children turned out to be Baby Mario, Luigi, Peach, Donkey Kong, Wario, and Bowser. He later fought Princess Peach as Giant Kamek, working for Bowser once again.
Recently the Mario Bros. went back to past to the time when they were babies. There they encountered Baby Bowser who had Kamek helping him on certain occasions. In the end, he was seen carrying Baby Bowser home.
After several failures, he quit working for Bowser. But this was no worry to Bowser as he has an army of Magikoopas waiting to replace Kamek. Kamek is now a retired Magikoopa who uses his magic to help people with there problems.