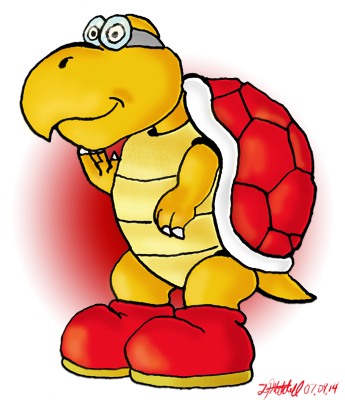 SKILLS AND ATTACKS: Butt Slam, Shell Spinner, he can disable your partner.

STRENGTHS: It has very much defence and it is very hard to put it to sleep and confuse it.

BACKGROUND: Kent C. Koopa was unce upon a time a normaly Koopa Troopa. He worked at Bowser and he's job was to deliver poisonous means to a town. But someting got wrong and a box of means fell over him and he becamed bigger and stronger on a weird way. He was blind so he got hold of a pair of glasses. Bowser told him to go wherever he wanted to go. So Klark C. Koopa went through the whole world searching for Mario but he didn't care at the end. He ran off and nobody has seen him since that day!

EVOLUTION: Kent C . Koopa camed for the first time in Paper Mario as a Extra Boss. Many think that he first appeared in Yoshi's Island but that turtle was called Hookbill.