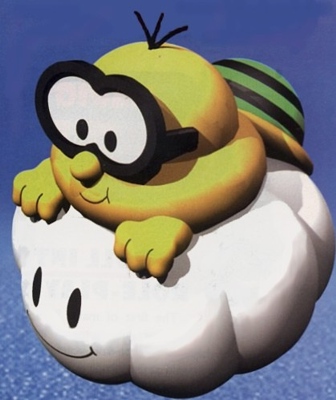 SKILLS AND ATTACKS: Bolt, Chomp, and Static E. They also like to throw Spiny eggs.

STRENGTHS: Their ability to fly in magic clouds gives them a natural advantage.

BACKGROUND: Lakitus are a faction within the Koopa Troop that knows how to use magic to control the weather. They ride around on the backs of magical clouds with smiley faces, and they like to keep Spinies as pets. They often use Spiny eggs, and the eggs of related monsters as weapons.
Because of their special ability, and their relative intelligence, many Lakitus have broken away from the Koopa Troop to become independent agents. Some work for any thug that will hire them, but others have found more honest employment. The Lakitu Brothers, for instance, have become famous for their daring documentaries, especially their work on one of Mario's most recent adventures, when Bowser attempted to take over the Mushroom Kingdom Palace and it's stars.
The fact that some Lakitus have rebelled annoys Bowser to no end. However, there is little he can do about it, as the powers these particular Koopas control are so strong that even he can't exercise much control over the Lakitus. This brings up one other point, the Lakitus are Koopas, and could be considered close relatives of them, but have not been listed as such because there are significant differences between the two.

EVOLUTION: Lakitus have a long and varied history. Only a few other enemies have appeared in as many games as they have.
I have to say - it took me forever to finally figure out what Lakitu was supposed to look like in Super Mario Bros! As much as I played the game, he never really looked like anything but a cloud with some eyes on top of it to me. But finally it all came together, and I have to say that now, I think he's pretty good considering the graphics of the day.
In Super Mario Bros. 3, a simplified design was used, perhaps to make it a little more obvious what Lakitu was supposed to look like. This design still looks little like the drawings.
Finally, in Super Mario World, Lakitu started to resemble the drawings quite closely - in fact this is still one of the most accurate looking ones. At this time, a number of new species appeared, as well. Fishin' Lakitu tricks prey into revealing themselves by dangling a 1-Up mushroom in front of them. Others began to hide in pipes.
Super Mario World 2 introduced a more sketchy-looking Lakitu, who sort of harkens back to the original Super Mario Bros. design. It also introduced Aqua Lakitu, a species of Lakitu that likes to hide underwater. Super Mario RPG also went with the original design in many ways, although bringing it into 3D.
Super Mario 64 brought Lakitu back in a cloud with a conspicuously missing smiley face. Perhaps a strange side-effect of being sucked into those paintings? Yoshi's Story brought a very life-like 3D Lakitu that flies around in a cloud that looks like it's a bunch of bean bags sewn together.