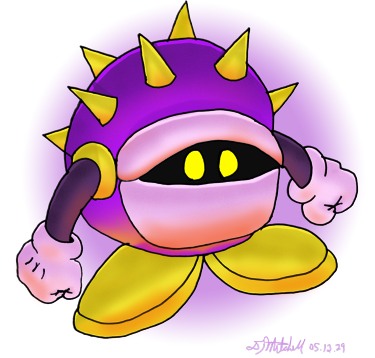 BACKGROUND: This purple-shelled beast looks a lot like Spikester, but he's not related to them. This creature is actually a very large beetle-like insect with a carapace covered in yellow spikes. Oerlikens are highly heat resistant and prefer to live in warm environments. Many can be found in and around Barrel Volcano.
While they're not overly dangerous on their own, Oerlikens tend to form groups with other creatures and can become difficult opponents. They have large appetites and are known to eat hundreds of smaller insects in a day.