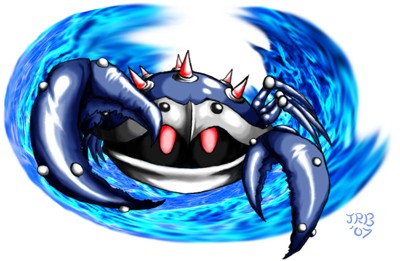 STRENGTHS: Strong against Jump and Poison.

BACKGROUND: Star Crusters look almost exactly like the giant Crusty Crabs found in the Ocean around Jonathan Jones' ship, but they insist they're NOT CRABS. In fact, one theory is that they are an alien species enslaved or employed by Smithy and used for defense. No such creature was found around Bowser's Keep until Exor crashed into it.
Not much else is known about Star Crusters, they have disappeared since Smithy was beaten, possibly exterminated by the Koopa Troop.