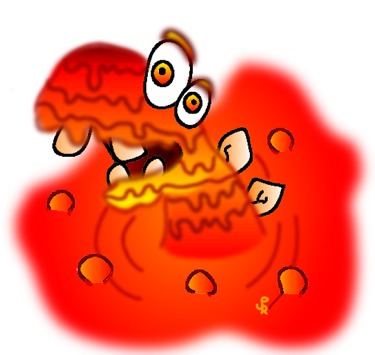 STRENGTHS: Some species attack you by surprise, others simply block your path.

BACKGROUND: Blarggs used to be ordinary dinosaur monsters. Unfortunately, they weren't very bright and thought it would be a good idea to go bathing in a lava pool. They burned down to their skeletons, and therefore became extinct. One day, some force in the lava surrounded the bones, bringing the monster back to life. All around the world, other beasts began finding this miracle magma, turning them hideous, but making them immortal.

EVOLUTION: Blarggs first appeared in Super Mario World. They were googly-eyed dinosaur bones covered with lava. They were most likely an inspiration for Czar Dragon, because they have the same eyes and bucked teeth. Blarggs reappered in Yoshi's Island. They were entirely different from their Mario World counterparts and were red blobs with mean eyebrows and gaping maws. There were giant-sized versions of this species called Gargantuan Blarggs. Because these two look so different, there is debate on whether they are the same species. Yoshi's Island took place before Mario World, so that is a factor to consider.
In Yoshis Story, Blarggs looked similar to the ones Yoshi's Island, but had a new feature, arms! Small limbs protruded from the beast. Is this a new stage in Blargg evolution? What purpose do the little limbs serve? Furhter research will answer these questions.