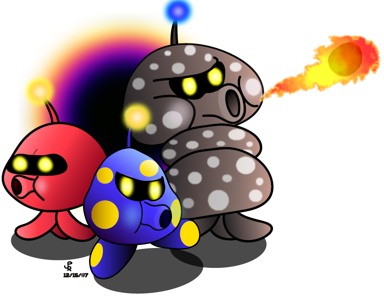 STRENGTHS: They are numerous, some cannot be damaged directly.

BACKGROUND: Electrogoombas were actually Goombas that Bowser used in his interstellar army. Some of these Goombas had been exposed to strong levels of radiation, which mutated them into strange creatures. Some of the Goombas changed only slightly, while others morphed into totally different forms.
Bowser found the Goombas and he was so impressed that he cloned and named them "Electrogoombas". They were deployed in various galaxies in multiple numbers, but they were no match for Mario.