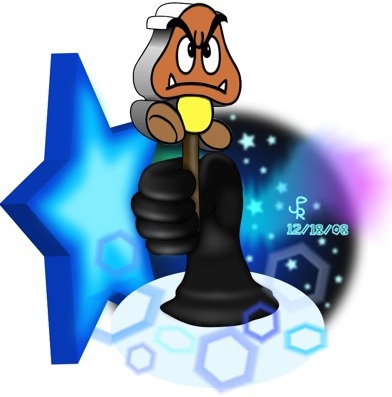 BACKGROUND: A Handfake is a strange creature shaped like a hand but made of black ooze. These monsters live on Star Hill and the Star Shrine, an area high above the Mushroom Kingdom. In battle, a Handfake will hold signs with pictures of various enemies on them. Depending on which enemy picture is on the sign determines how the Handfake will attack. These signs can be destroyed, causing the Handfake to bring a different sign into battle.
Handfakes formed from black goo, and got hit by a magical star, which transformed them into hand form. Handfake used Goomba, Paratroopa, Bob-omb and Bowser signs to fake people out.