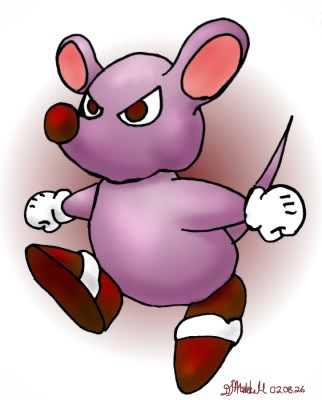 WEAKNESSES: No particular weaknesses, but they tend to be cowardly and run from battle.

BACKGROUND: These rats are more powerful than their relatives, Rat Funks. They are pink in colour and wear big running shoes. These wild creatures like to infest cities and ships where they spread disease. They are apparently quite a problem for Jonathan Jones in his sunken ship, but his band of pirates can't be scared away by a bunch of over-grown mice!
Alley Rats are not too dangerous, but they often hang around more powerful monsters for protection, and they can infect people with their poisonous tails. In the sunken ship, they have even been known to commandeer Bullet Bill-shooting cannons to scare away their enemies, but they will often run away from a fair fight.