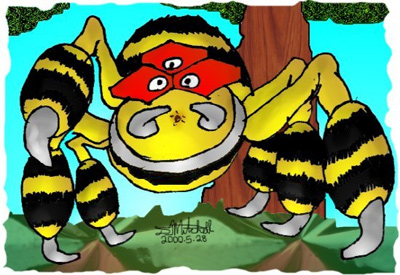 BACKGROUND: Arachne is a huge yellow and black spider that inhabits marshes and wet grasslands. It is especially common around Rose Way.
The monster is very powerful and can be very dangerous to travellers. It has a tough hide which can defend against physical attacks quite well, and it can take many hits. It is, however, weak against magic spells, especially cold ones.
This creature is wild, but their numbers were particularly high, and their behaviour particularly aggressive during Smithy's invasion. Some suggest that these creatures (as well as Starslaps) may have been provoked by Shy Guys which entered the area around the time Smithy attacked. While there is no proof, the theory is that the Shy Guys were hired by Smithy.