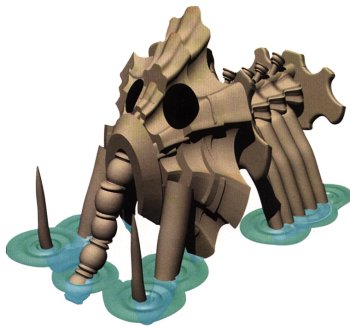 STRENGTHS: Strong against Thunder, and the Geno Whirl attack.

BACKGROUND: Mastadooms are the remnants of ancient elephant-like creatures, animated by black magic. Rumour has it that they were resurrected by Smithy or one of his cronies during their invasion. Mastadooms were not common before or after the invasion, but during the invasion they were fairly numerous, especially on Star Hill, which some believe was once used as a graveyard by these prehistoric creatures when they were still alive.
Mastadooms are considerably powerful and dangerous, but do not normally attack wanderers unless provoked. If you spot one, give it lots of breathing room while you pass by.