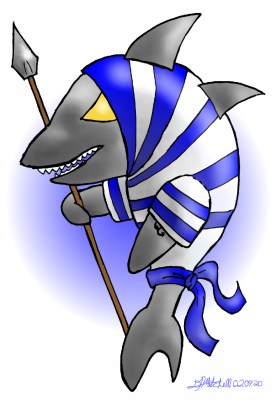 BACKGROUND: These pirate sharks are Jonathan Jones' crew. He has divided the crew into two teams, one of which wears blue and one of which wears red. The blue team is made up of the toughest and mohttp://www.mariomonsters.com/characters/edit_character.php?id=33&status=ok Edit a Monsterst trustworthy pirates: they are Jonathan's elite bodyguards.
Even though they are stronger than their red counterparts, Bandana Blues are actually not too dangerous. In large numbers they can be a threat, but a one-on-one fight with a Bandana Blue isn't that difficult. An experienced fighter could beat them easily.