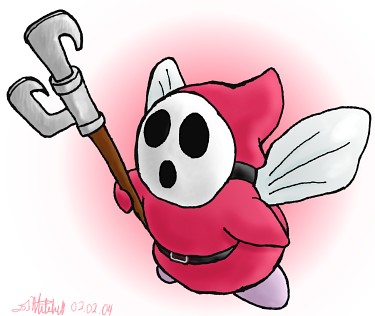 BACKGROUND: These monsters are known by two different names: Beezo and Shy Away, but Beezo is taken to be their official name since it was used first. While most Shy Guys use machines to help themselves in battle, Beezos are a rare group of Shy Guys that found a way to mutate themselves with insects to increase their power. This mutation had an unexpected side-effect: it caused the Beezos to become more in tune with nature. Many have left the 8-Bits Club to live peacefully in the wild where they like to practice horticulture. These monsters are now hard to come by.
Some Beezos remain in the 8-Bits Club, especially in the land of Sub-Con. Most Beezos are not very aggressive but they are fairly dangerous in battle. Many know a few magic spells and they are hard to hit since they fly around so quickly. While the wild ones are sometimes peaceful, they will defend forests from invaders and some are still willing to hire themselves out. Valentina was able to hire some of the Beezos near Land's End where they used the plant life to try and stop Mario.

EVOLUTION: Beezos first appeared in Super Mario Bros. 2, where they looked more or less like winged Shy Guys, but the hoods they wore were rounder. They also carried spears around with them.
In Super Mario RPG Beezos looked a lot more like Shy Guys coming quite close to the original illustrations of the creatures. For some reason they also changed names to "Shy Away". These ones usually carry spears, but one carried around a watering can which he used to power up the plants in the forest.