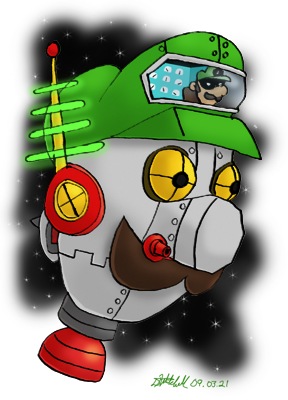 BACKGROUND: When Luigi was brainwashed into Mr. L, he built a giant robot named Brobot and called it his metal bro. Mario and his friends battled in space and defeated him. Mr. L then made a modified Brobot named Brobot-L-Type. After he was again defeated, it is unsure of what happened to Brobot.

EVOLUTION: "This is Mr. L's hovering, head-shaped robot. He must have tricked it out with all kinds of weapons. I guess that means Mr. L is a pretty awesome inventor, huh?" - Catch Card