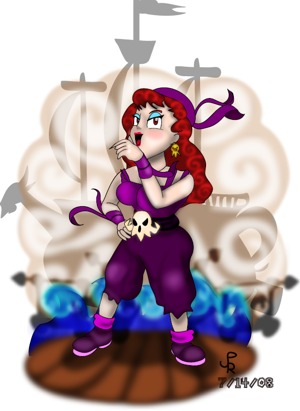 BACKGROUND: Captain Maple Syrup was once the scourge of the seven seas with her vast army of the Brown Sugar Pirates, her inventing prowess so large that it rivals even the 8-Bits Club and Professor E. Gadd, and her fine vessel the S.S. Tea Cup. She eventually found Kitchen Island and took it over using a magic lamp.
One fateful day, Wario came to Kitchen Island, destroyed Captain Syrup's castle atop Mt. Syrup, and took the lamp, getting himself a castle, a vast treasure, and freed the island in the process.
Captain Syrup survived the onslaught and rebuilt her castle and her crew, and the Black Sugar Pirates arose from the ashes, her plan was to steal all of Wario's treasure as revenge. To this day Captain Syrup continues plotting against Wario, but he always seems to get the best of her.