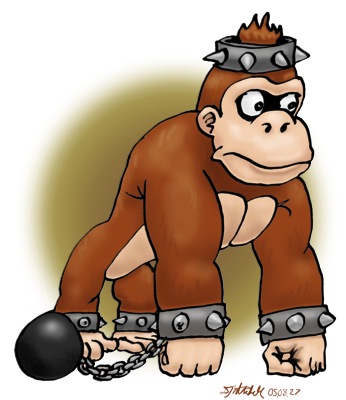 BACKGROUND: Smithy used hypnotic shackles to enslave a large number of gorillas and force them into battle against Mario and friends. Chained Kongs look very similar to Guerillas (not to mention the famous Donkey Kong) but they are more powerful. Because of their added strength, Smithy posted these creatures in Barrel Volcano to defend the final Star.
The Chained Kongs were used to lead some of the natural inhabitants of Barrel Volcano into battle against Mario, they tended to work well with Magmi(???) After Smithy was defeated, a few remaining Chained Kongs left into the Mushroom Kingdom wild. Like Guerillas, they're not native to the Mushroom Kingdom, so it's unknown if they will survive there.
Although free from Smithy's control, Chained Kongs are still pretty aggressive and quite dangerous in the wild, it's best to stay away if you happen to run into one, although they're very rare now.