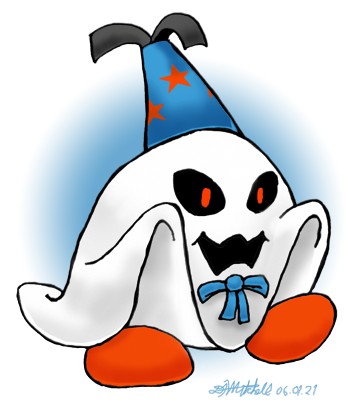 STRENGTHS: Whatever form he takes on he gets that character's special powers.

WEAKNESSES: Quite Weak when he's just himself.

BACKGROUND: The old bell in the Creepy Steeple recently tarted ringing again, but every time it rang, a resident of Twilight Town turned into a pig. Mario heard of a Crystal Star in the Steeple and went to investigate. He made it to the top and battled a monster at the top. The monster then stole Mario's identity and his partners after the battle! The only way to get his identity back was to find Doppelganer Mario's real name.
With help from Vivian, Mario was able to find the fiend's name, Doopliss, and get back his identity and the Crystal Star. Later in the game, Doopliss returns as a member of the Shadow Sirens and uses his duplicating ability to fool Mario and friends. Beldam, the leader of the Shadow Sirens likes to abuse Doopliss by calling him Freak Sheet.