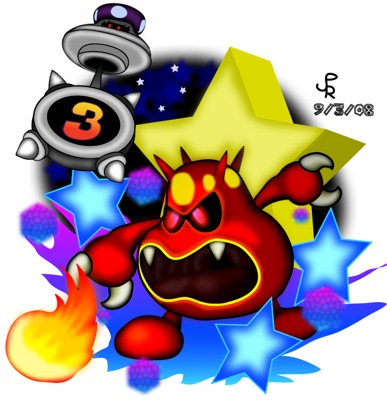 STRENGTHS: His spin attack can be hard to keep countering and his spikes on his head protects him from jump attacks.

WEAKNESSES: tIf you deflect his spike balls into he air, he will fall on the ground and can be jump on. Ice Flowers, Shells.

BACKGROUND: Elder Shrooboid is a red shroob who is the guardian of the Star Shrine. He is the strongest of all Shrooboids. When Toadbert was about to reveal the truth about the Cobalt Star, the Elder Shrooboid attacked the Mario brothers and turned Toadbert and Kylie into Shroob mushrooms.