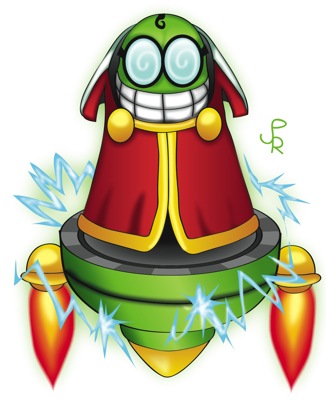 SKILLS AND ATTACKS: His headgear can fly and shoot Fireballs, not to mention that it can do a lot of other things.

WEAKNESSES: He's not too powerful without his headgear.

BACKGROUND: Fawful is Cackletta's right-hand man. He's highly intelligent and mixes his knowledge of technology with Cackletta's teachings in black magic to build crazy and dangerous inventions of all kinds. Fawful always wears his favourite red cape and his headgear which is capable of doing all sorts of things including flying, shooting energy balls, and containing the spirit of dead people for a while.
Fawful has a very distinct way of speaking. He often scrambles the words in his sentences and repeats himself regularly. Maybe he does it to confuse his enemies, or maybe he thinks it makes him sound important. Whatever the case, you should stay as far away from this little oddball as possible, he's sneaky and very dangerous.
After he and Cackletta were defeated by the Mario Bros., Fawful went into hiding in the sewers underneath the Mushroom Kingdom Castle. Here he ran a shop where he sold equipment for beans.