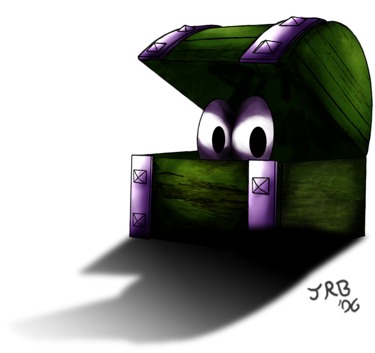 STRENGTHS: Strong against most magic attacks, and it can counter regular attacks.

BACKGROUND: While Hidon is quite similar looking to Pandorite, this monster is not a ghost like Pandorite is. In fact it is a strange, green, treasure chest-shaped monster that traps other monsters within and uses their powers to aid it in battle.
There was only one known Hidon in existance and it was destroyed by Mario and his band of adventurers while searching for parts of Star Road for Smithy. Some believe the monster was put on the Sunken Ship to protect the treasure of the sailors who lived on the ship before it was sunk by King Calamari.