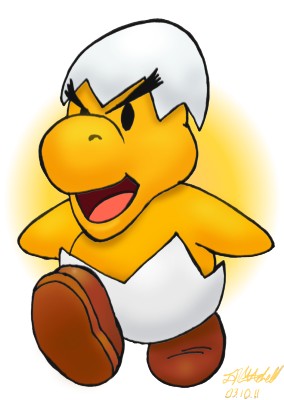 SKILLS AND ATTACKS: Fly, Shell Armor, Spiked Shell Armor, Magic Staff attack. He only uses one or two per battle until the final battle.

WEAKNESSES: Mario is always one step ahead of him. He's a little full of himself.

BACKGROUND: Jr. Troopa is a young but strong little Koopa who never left his shell after he was born. For a long time, he lived in the woods near Goomba village and bullied any smaller kids around. Then one day Mario came along and beat him in a fight, and Jr. Troopa has been seeking revenge against Mario ever since.
The little orange shell-wearing Koopa is very stubborn and a bit of a bully. He'll keep fighting someone even if he gets beaten over and over again.