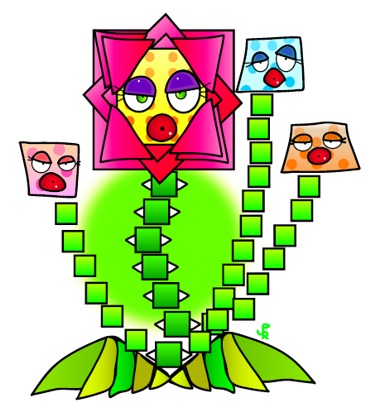 STRENGTHS: He has petals of fury!

WEAKNESSES: Jewels, and his insanity.

BACKGROUND: King Croacus IV is the fourth member of the Croacus dynasty and current leader of the Floro Sapiens. He has a weakness for beautiful objects, so when he came across the fifth Pure Heart he HAD to have it.
Unfotunately, the Floro Sapiens' prehistoric neighbors, the Cragnons, began littering in the Floro Sapiens' drinking stream later in Croacus's reign. The polluted water drove the king and in minions mad, and he began kidnapping Cragnons, making them his slaves. Fortunately, Mario wilted the kooky king and made the Cragnons promise to stop littering so that this would never happen again.