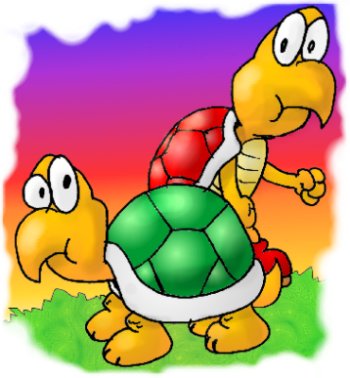 STRENGTHS: Their shells offer a bit of protection from minor attacks.

WEAKNESSES: They are susceptible to most attacks.

BACKGROUND: Koopa Troopas are turtles. They seem to have learned to walk on their hind legs, although they don't always. Koopas can sometimes be knocked out of their shells, and are even weaker than Little Goombas when exposed.
Koopas are Bowser's largest division of troops, alongside Little Goombas. They help to form the backbone of the Koopa Troop. They can inhabit virtually any type of terrain, and they often appear in force. But not all Koopas are bad: A village of peaceful Koopas has been established to the east of Toad Town in the Mushroom Kingdom.
Koopa's shells are among the most useful weapons in Mario's artillery, although they can sometimes backfire on him. In recent years a group of Koopas that left the Koopa Troop has built a home in Koopa Village where they live in peace.

EVOLUTION: Koopas stayed much the same through the NES Super Mario Games, as you can see by the SMB and SMB3 pictures above. Like so many enemies, they changed drastically in Super Mario World. They started walking upright and when stomped, they would pop out of their shells instead of hiding in them.
Although they briefly reverted to the old style in Super Mario Land 2, they have continued to walk upright and pop out of shells in later games. One particularly strange occurance is the fact that they walk upright in SMW2, which takes place before the other titles, chronologically. This would suggest that they have been able to walk on two legs for a long period of time, and didn't just develop the ability over the years. For some reason, they chose to walk on all fours in Mario's earlier encounters with them.
Super Mario 64 went back to the style used in the Super Mario World games, and their shells could now be used like skateboards on nearly all types of terrain! In Paper Mario, there are both good and bad Koopas. The good ones are green, while the bad ones have red shells and wear spiked collars and sunglasses. The ones in this game look very close to the way they were supposed to in the Super Mario World art. This style would be keept for the next two Paper Mario games.
In Mario & Luigi, Superstar Saga, Koopas are armoured. These may actually be a part of Bowser's armoured division, the Koopatrols. In Super Mario Galaxy, they went back to moving on all fours. It could be that these are a different species maybe relatives to the Shellcreepers seen in Mario Bros., but there's no hard evidence to prove that.