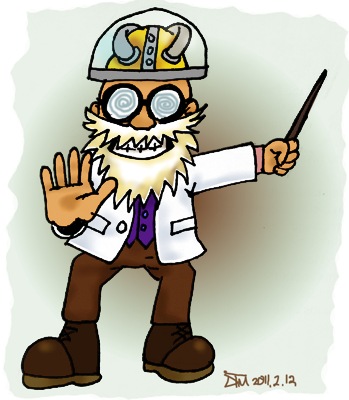 BACKGROUND: Mad Scienstein was just a simple peasant living in a peaceful village working diligently in his basement to perfect potions of invisibility. Once his formula was complete, he brought it to all of the major institutions of science hoping they would accept him as Professor Scienstein, a title that he had always wished to attain. It turns out, though, that none of the institutions would accept him on the basis that his potions would last only until the consumer walked into a dark tunnel (and everyone knows that international spies are required to walk through dark tunnels). His hopes and dreams dashed, Scienstein was approached by Rudy the Clown and offered a job to work as his minion to take over the world and keep Wario from stealing his treasures. It was at that point that he donned his famous brain helmet and googly glasses, and a new personality that he called "Mad Scienstein".